← Of Mentors and Mentos
(Dis)(Re)connect →

This past week’s events provided more questions than answers for me. Some things will almost certainly be iconized for eternity as a question mark however much “evidence” is amassed in the intervening months and years.

Some things did come into sharper focus.

NCIS is a show, not an apprenticeship.

I would have bet my bottom dollar that this whole incident was perpetrated by some guy named Toby or something similar from Wyoming or any of the other lower 48. It felt relatively amateurish in its execution. I read online that its timing mirrored closely to other domestic terrorist events like Waco and Oklahoma City. It was Patriots’ Day (a perfect photo-negative springboard for twisted minds of actual anti-patriots). It was Tax Day.

So when I went online like so many millions and saw this photo on 4chan, the crowdsourced photo site which was attempting to crack the case in real-time, I thought: “bingo.” Goofy looking white guy. Who holds a backpack like that? 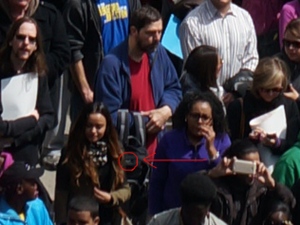 Case closed. Except it wasn’t. We still don’t know most of the details, but it seems clear that the perps are not McVeigh wannabes. Or this unfortunate guy who’s probably a history teacher somewhere.

I was wrong. You know why? I don’t know diddly about crime solving. My only experience with police work came as a seventeen year old in college. Suffice it to say I was not on the solving end of the equation. Then, like this week, the real pros quickly sussed out what was what.

Journalism will never be the same.

While I wasn’t a crime fighter, I was a journalism major. In watching the coverage of this spectacle, I was shocked by just how bad so much of it was. I think I know why. It’s a chicken and egg dilemma. Social media puts information out globally in real time. Some of this turns out to be fact. Much of it turns out to be decidedly not. So it’s understandable that professional journalists don’t want to be in the awkward position of being on-air and scooped repeatedly by some wannabe Jimmy Olsen from Jamaica Plain. Confirming things two hours after the rest of America has read the tweet is deflating. This journalistic race to keep up and keep relevant leads to IDing one of the terrorists as the missing Brown University student. We now know that’s patently false.

It’s not bad enough for that kid’s parents that he’s missing. Now he’s alive but a despised terrorist accused on a global basis. Then he’s missing again. Just imagine. I can’t.

In the most humbling gaffe, CNN reported that they had it on high authority that the suspects are “dark skinned.” It was the journalistic equivalent of the cable company saying they’ll be over between 8am and 4pm. Totally useless. And inexcusable. People are on high alert already. Now we just casually throw it out there that anyone without Irish pallor is a prime suspect? Not good. Not smart. Not journalism.

I’m going to hold the NY Post off to the side. I think CNN and most of the other coverage I got it wrong because the were sloppy and skipped steps in the process to try to keep up. The Post, as always, knew what it was doing, knew it was wrong, and did in anyway. That’s not journalism and the less said about the Post the better.

Social media enabled by technology undoubtedly played a role in apprehending a vile murderer yesterday. That’s great. In fact, authorities are to be commended on leaning into it rather than fighting against it as has happened so often in the past. They in effect deputized a whole city to tighten the net on this criminal. It worked.

But in the same way that booze can take ideas conceived in the heart and usher them directly to the mouth (and sometimes the loins in the most unfortunate cases) without running them through the gristmill of the brain, social media short circuited the journalistic process. It took whispers and gave them a microphone without benefit of editing, fact-checking, moral debate, or just letting them breathe a minute so they can be examined and reflected on.

The Boston Globe is up for sale largely because its printing presses belong in a history museum not a modern media organization. But in the time it took took typesetters, illustrators, and pressmen to get all the news that’s fit to print off the presses and into an audience’s hot little hands, real journalist pros had ample time to make absolutely sure they had it right more often than not and that it was being expressed succinctly, clearly, and and accurately. I don’t think it’s any coincidence that Globe journalists get high marks for their coverage.

Maybe we don’t need presses. But we do need time. Time allows for curation. And curation is the filter that separates the Brown student from the white noise.